Crying Wolf
Crying Wolf was a temporary, unsanctioned art piece. It was on Stonewall Peak in the Cuyamacas at the very top which has a lookout point made in stonework. A pedestal was existing and it had a threaded rod with nothing on it. If you wanted to have a pedestal with a threaded rod, it wouldn’t be allowed (truly you could put your eye out on it). I had hiked there and had an idea for a sculpture and to use the info - displays that were long empty. Welded steel was fabricated in a see-through line drawing aesthetic. Text made with vinyl letters on a panel. Both were hidden in a (large) backpack and hiked up for the install. This piece inferred overpopulation with statistics and the tongue in cheek phrase that building could never be allowed in the State Park. After a day or so of this gorilla art (term for something unsanctioned) in place and it was spotted and removed. They preferred the threaded rod! Please note that all my gorilla pieces are designed so that they are not permanent and can be removed without damage to the original substructure. This is the way our vandalism laws are written and I adhere to those rules.
Please also see the Roam-a-Rama article written by Jerry Schad about a few of my pieces (last paragraph). 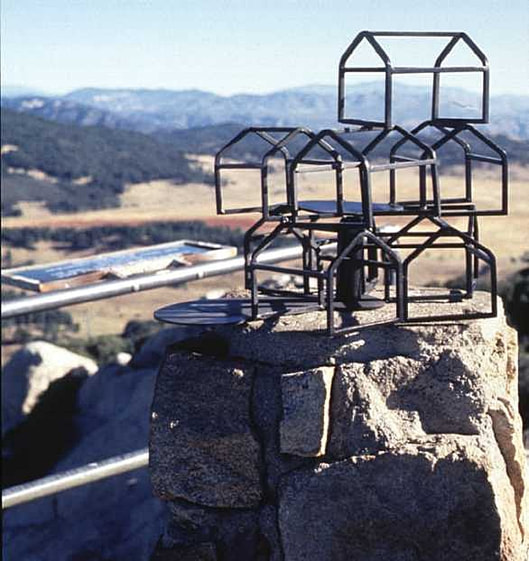 A Guide to Unexpected San Diego
Coming soon to a vandalized scenic overlook or trail side destination: Public art of ambiguous intent and questionable legality. Art scaled to the exact dimensions of missing historical plaques and interpretive markers. Art with a cynical, wry, or whimsical message - depending on who's viewing it.
​
Last autumn, a shiny gray plaque suddenly appeared on the site of the forlorn and long-vandalized Imperial Highway (County Highway S-2) historic marker at the San Diego - Imperial County line. Where once there resided a heavy bronze plaque commemorating the opening of a paved link to the Imperial Valley in the '60s, there now rests a graphite-rubbed plaster replacement, with words solemnly proclaiming," This is the desert. There's nothing out here, Nothing"

Ironically, this unauthorized expression of a local artist's creative impulse may prove more resistant to opportunistic vandals that the original bolted metal plaque- probably the result of a vandal who tried to pry a seemingly valuable piece of metal out of its frame, only to hear the disappointing crack of plaster beneath the plaques's shiny gray patina.

Another unauthorized piece of art is (was?) found on Stonewall Peak in the Cuyamacas, perched squarely atop a stone and mortar pillar that once held a direction-finder. "Crying Wolf" as the artist call it, a welded rod sculpture of piled up houses, reminiscent of the voracious new construction on San Diego's fringe, uneasily looks out over thousands of acres of pristine woods and meadows. "Development couldn't never happen here", the artist states (or asks) on a Plexiglas coated sign next to the sculpture. Echoing further comments about overpopulation is a single word scratched into the plastic 'Rabbits".

The artist's "canvas" also included a number of trail side or mountaintop locations were small, vaguely female figures ("Female Action Figures", according to the artist), derived from a twisted piece of tee root and duplicated in the form of gray concrete casts, have been placed conspicuously or in conspicuously amid their surroundings, The artist hopes that passersby might notice the odd material, neither stone nor woo,, and that they will appreciate in each figure the qualities of strength and femininity. Some casts have been picked up right away, while others have remained in situ for weeks or even months. 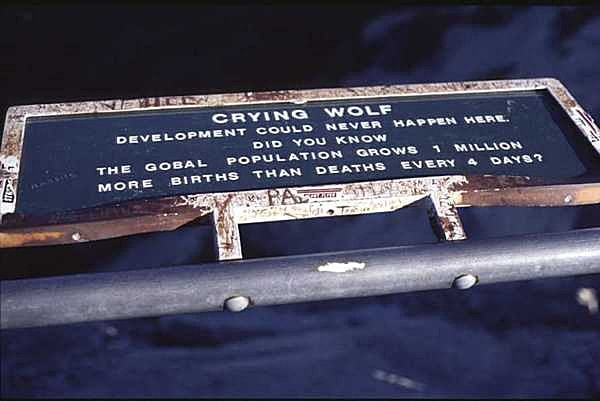