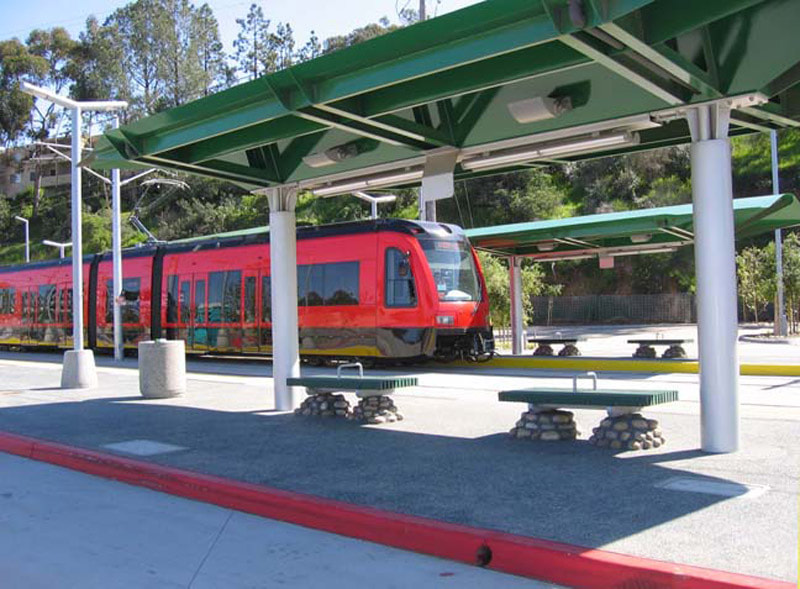 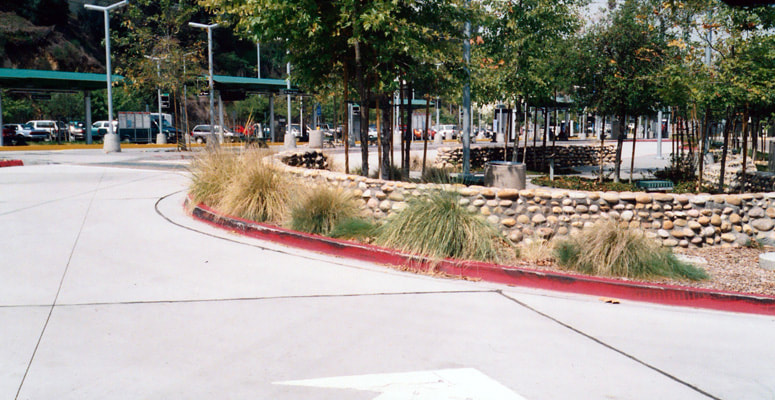 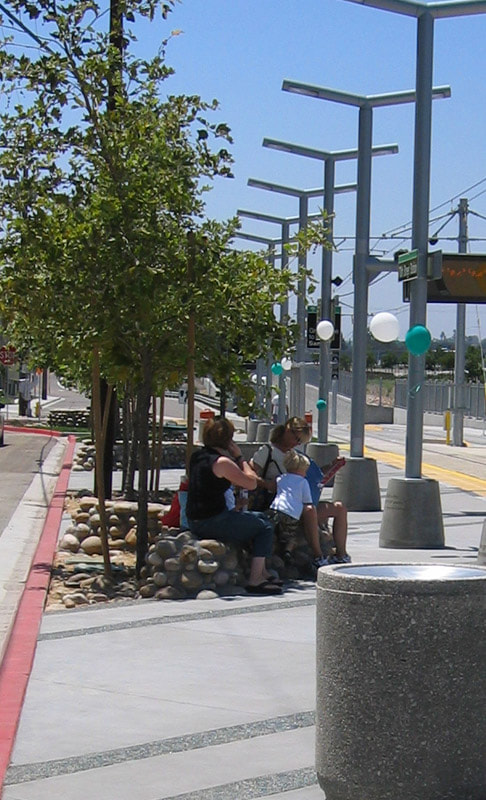 Light poles have concrete bases that have sand blasted text. See the bottom for the full text. 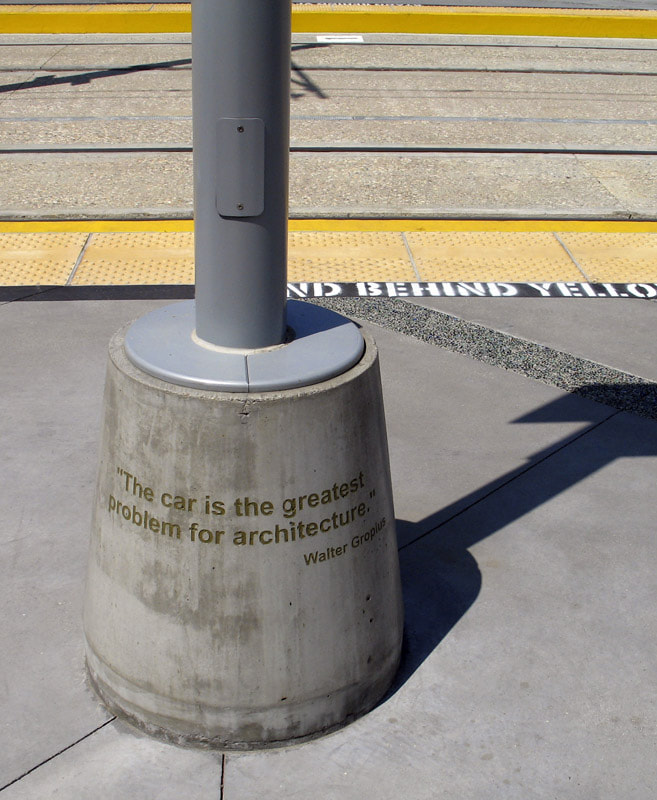 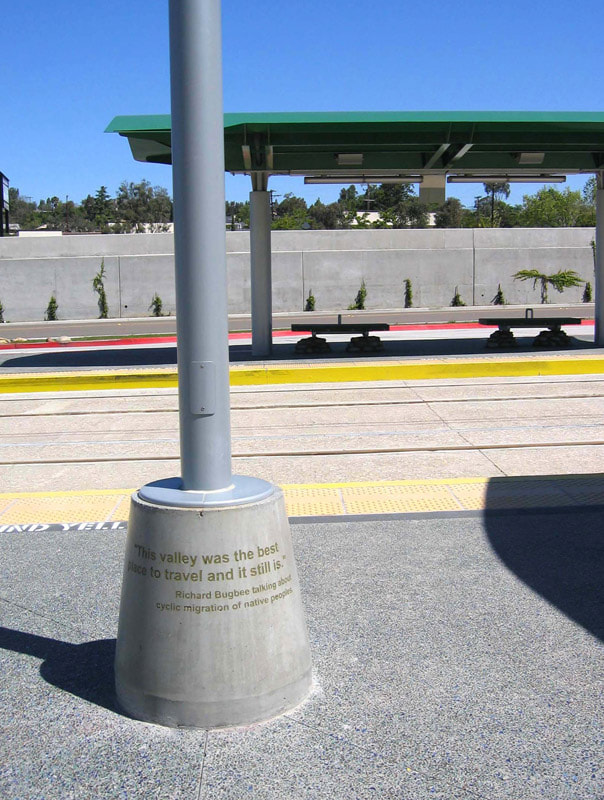 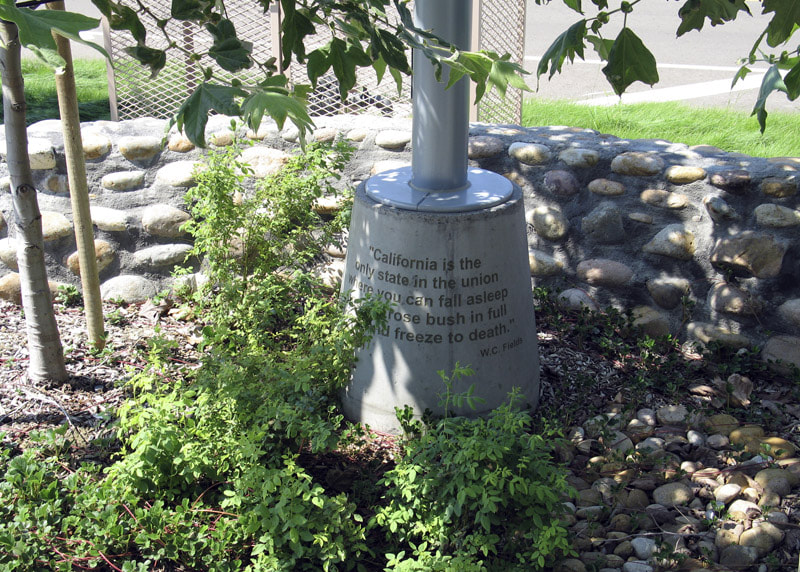 In the historical map case
This is a map of the major Native American settlements of this area circa 1800. Please notice that the trails used to get from one settlement to another will ultimately become modern roads and freeways. The river and streams were very important as travel corridors as well as for food, water and navigation. The settlements and trails were convent for Spaniards to usurp as their own. Special thanks to Ricard Carrico for his research.
The other side is all about the geology of the site.
Special thanks to Dave Bloom and San Diego State University for the information.
I 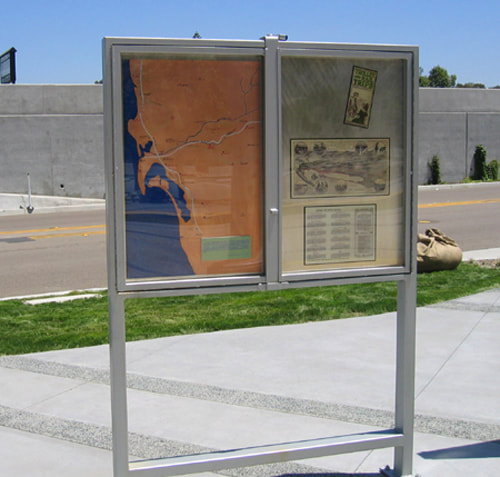 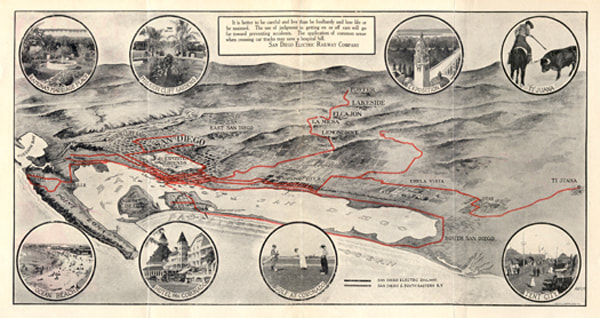 
This piece is made of Found Objects, meaning that it has actual train parts and an actual metate stone. It is also kinetic, as the viewer moves the switcher arm, it runs a wheel on the metate and moves a painting on the signal disc. The painting is black and white to invoke an older time and is my rendition of what Alvarado Creek might have looked like.


The sculpture's placement is a bit different. Usually an art piece has lights, is on a central platform and directs a viewer to see it as art. I put the sculpture in a hidden place, one where someone might go for a bit of quiet while waiting for the trolley or a bus. It is the sort of thing that would catch your eye only after sitting there a while. I hope for a curiosity and then a manipulation to try and figure out what the heck it is. Could this be art if someone didn't tell me so? Either way its fun to get your hands on train equipment and make it move.
There are many plaques that speak about the native plantings. Cast in metal, they educate and endear viewers to the original landscape, well before the trolley. 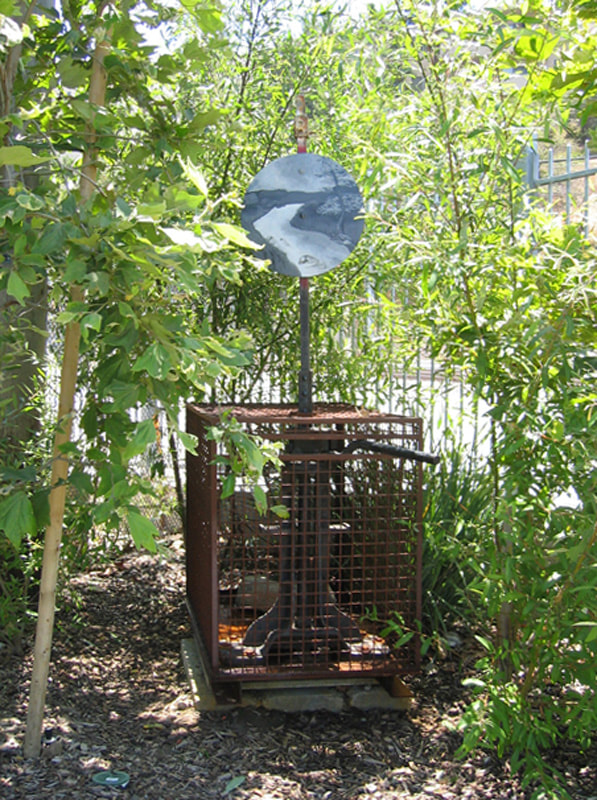 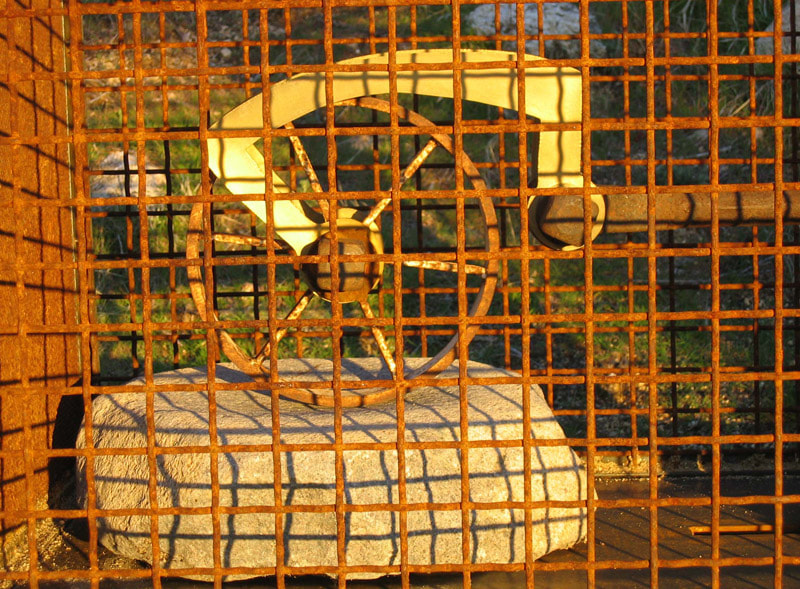 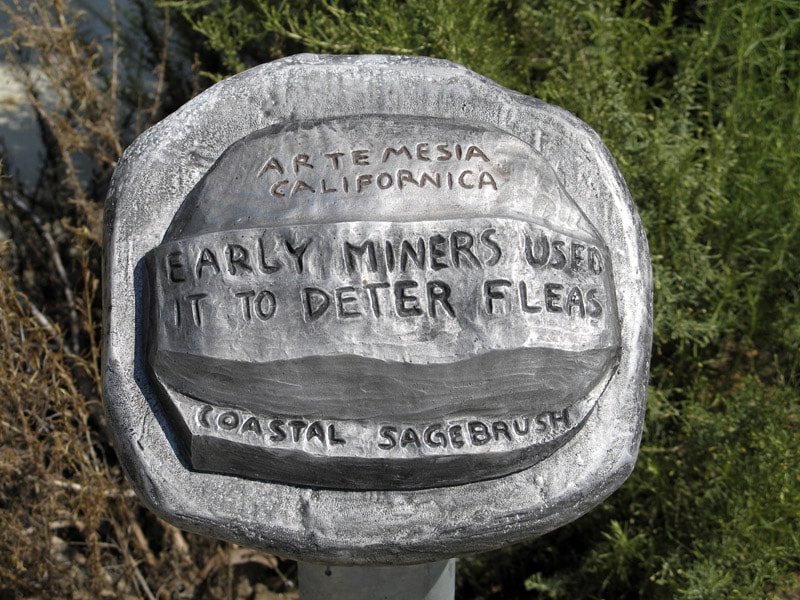 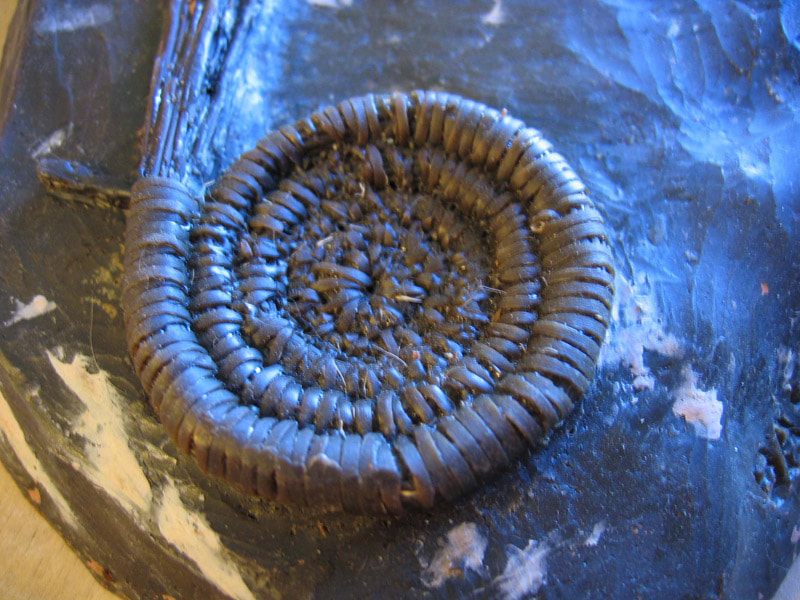 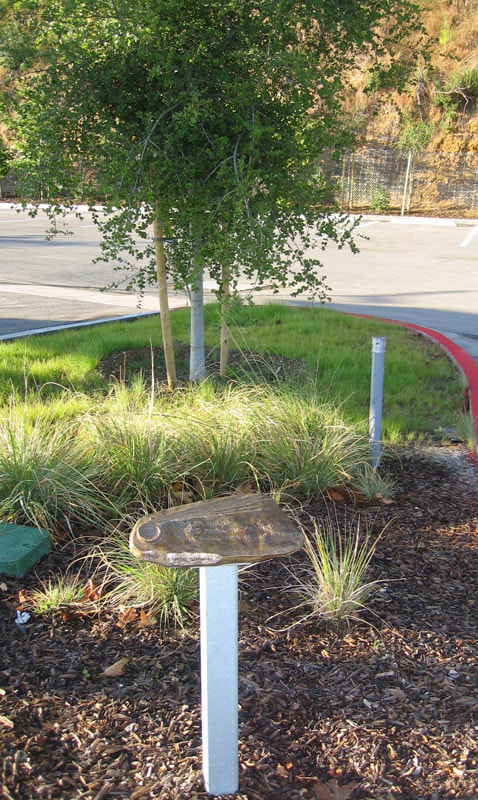 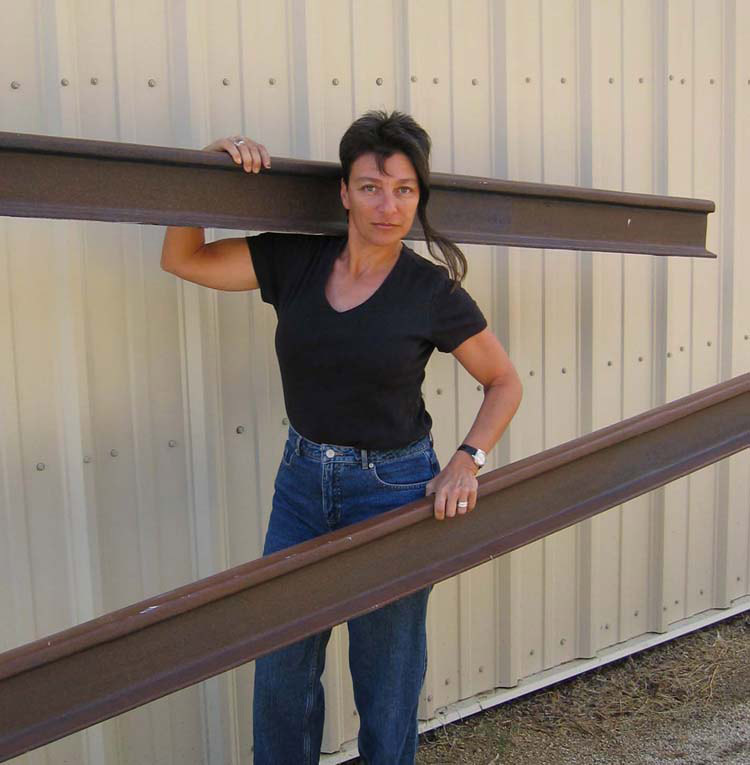 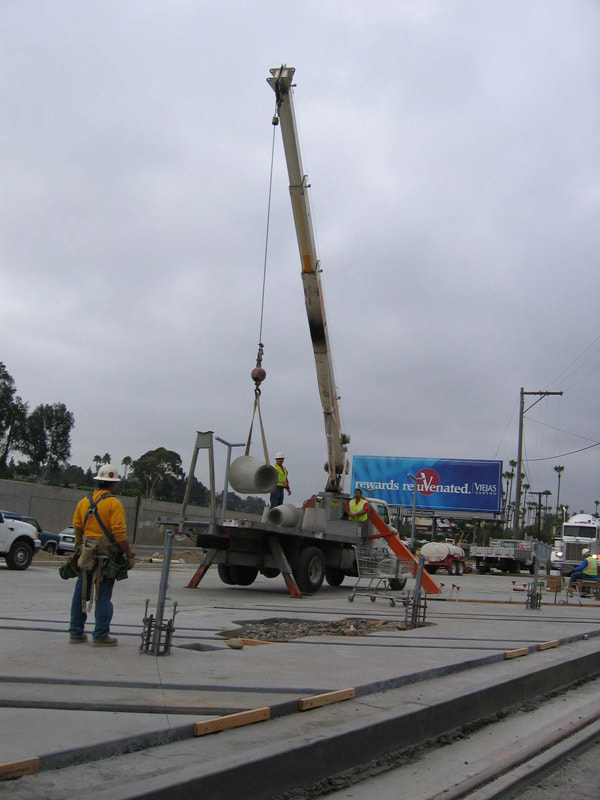 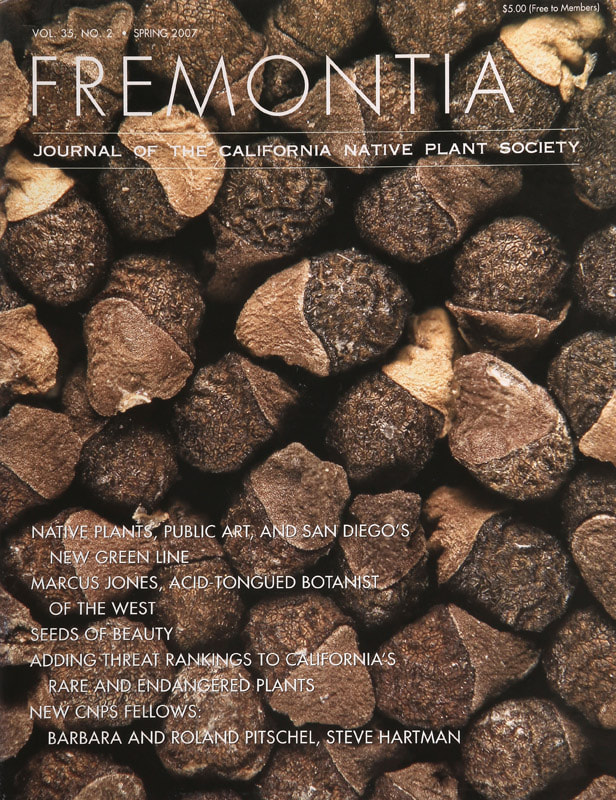 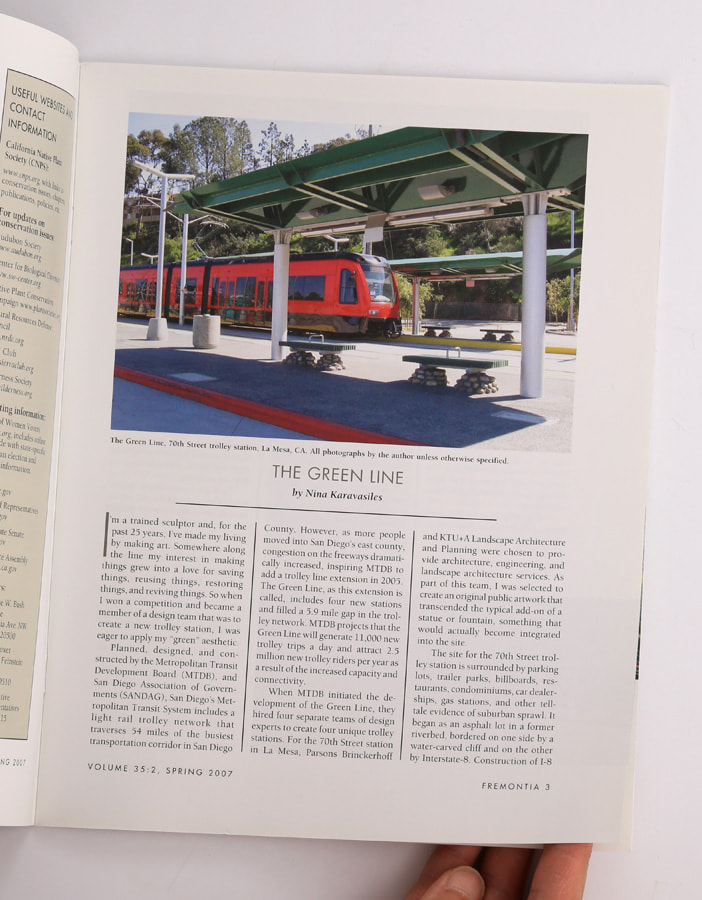 Here is the list of all the pole base quotes.

Everyone lives downstream from someone else
Anonymous


Adopt the pace of nature, her secret is patience
Ralph Waldo Emerson


Many of the world’s people must walk 3 hours to fetch water.


The average annual rainfall in La Mesa is 13 3/4 inches. The average American uses 150 gallons of water a day.


Censorship can happen without your realizing it
N. Karavasiles


Your recycled plastic bottles make the wood-like substance of the benches.


All the stone here have been bather from the original Alvarado Creek below us.


Everything comes to him who hustles while he waits.
Thomas A Edison


Your thumb is the same length as your nose.


California is the only state in the union where you can fall asleep under a rose bush in full bloom and freeze to death.
WC Fields


Everything must go somewhere
Barry Commoner


Your best teacher is your last mistake
Nathra Nader


It is better to travel well than to arrive


When the well’s dry, we know the worth of water
Benjamin Franklin


We are know forever by the tracks we leave
Dakota


There is nothing in a caterpillar that tells you its going to be a butterfly
R. Buckminster Fuller


There are no shortcuts to any place worth going
Anonymous


How could solar power possible benefit us?


What could we do with recycled glass?


The average car commuter generates about 7,350 lbs of carbon dioxide per year


It takes 39,000 gallons of water to produce the average domestic auto


It is not safe to drink water directly from streams anymore.


The U.S. Fish and Wildlife Service estimates that 70% of the wetland riparian habitat nationwide has been lost or altered. This project has created approximately 3 acres of habitat for every acre we impacted.


Wild strawberry, sangria Chiloenis
If you can find this before another creature, this tiny berry is sweet and delicious.


The Spaniards, when the arrived in 1769, renamed all the natives “Mission Indians” 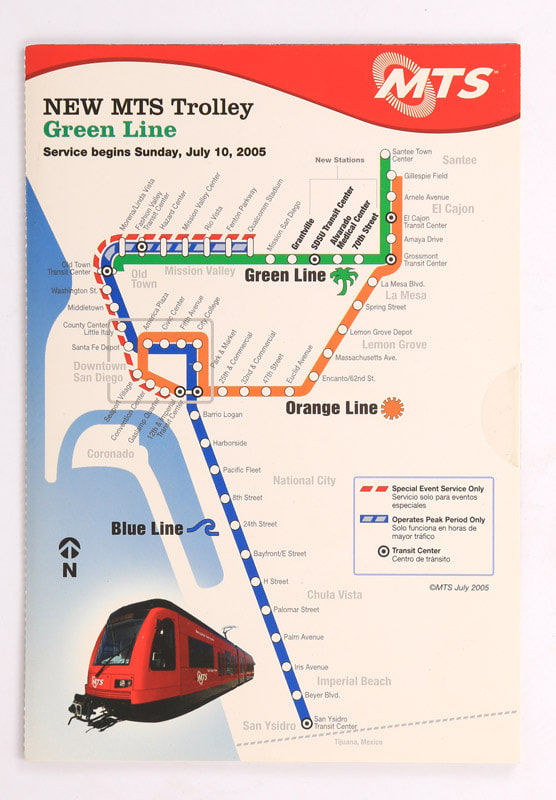